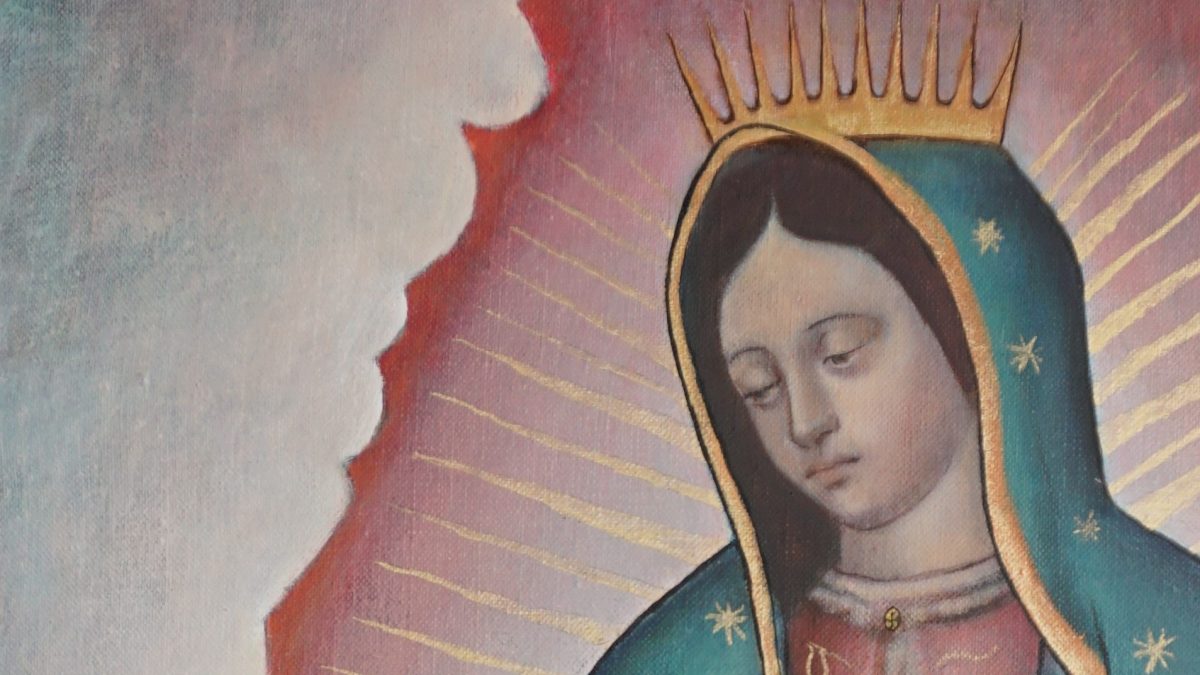 In 1326 the Blessed Virgin Mary appeared to a cowherd named Gil Cordero on the bank of the Guadalupe River in Extremadura, Spain, and revealed the existence of a statue that had been hidden in a nearby cave after the fall of Seville to the Moors in 712. The statue of the Virgin and Child was recovered, along with a document attesting to its history. Reportedly carved by St. Luke the Evangelist, the sculpture had been venerated in Patras, Constantinople, and Rome, before being sent by Pope St. Gregory the Great to St. Leander, Archbishop of Seville in the late 6th century.

After being restored to veneration in the 14th century under the title Our Lady of Guadalupe, the image played a pivotal role in Spanish history. In 1340 she became a patroness of the Reconquista when Alphonsus XI of Castile entrusted himself to her before his victory in the Battle of Salado. Thereafter the shrine of Our Lady of Guadalupe enjoyed royal privilege as one of the country’s great religious centers. Queen Isabella la Católica alone made twenty pilgrimages. It was at the monastery of Our Lady of Guadalupe in 1492 that she and King Ferdinand vouched their support to Christopher Columbus for his voyage to the Indies. Columbus himself carried an image of Our Lady of Guadalupe on his first voyage and returned to pay her homage upon his return to Spain. Before setting out for the New World in 1513, Hernán Cortés also made a pilgrimage to Our Lady of Guadalupe, and in 1521 he carried her image on his standard during the conquest of Mexico.

Ten years after the conquest, in 1531, the Blessed Virgin Mary appeared to an Aztec convert named Juan Diego on Tepeyac Hill, the site of human sacrifice to a mother goddess until the arrival of Cortés, and asked for a church to be built there in her honor. As proof of the authenticity of the apparition, she had Juan collect Castilian roses in his tilma, a traditional Aztec cloak made of cactus fibers, to bring to the bishop of Mexico. When the cloak was unfurled before him, it revealed a miraculous image of the Virgin as a pregnant mestiza, part Spanish like the roses, part Aztec like the cloak. She was immediately recognized as a symbol and protectress of Mexico, the nascent mestizo nation. Our Lady of Guadalupe, as she asked to be known, accomplished the conversion of eight million Aztecs by the end of the decade. Today she remains beloved especially by the Mexican people and the Mexican diaspora. The basilica which houses her image is the most visited Catholic shrine in the world.*

A Commission to Replace a Poster

The history of Our Lady of Guadalupe was very much on the mind of sacred artist Gwyneth Thompson-Briggs as she fulfilled a recent commission to copy the tilma image for a church in California. Studying the image itself, she was struck by its graphic excellence. “It strikes me graphically as more a symbol than a painting—which of course it is, by the will of Providence,” Gwyneth says. The drapery and the sunrays are highly stylized. The palette consists of muted versions of the primary colors: rose for red, teal for blue, and gold for yellow. These qualities make the image easily recognizable in reproduction, even at great distances, in small sizes, or in disparate media. “It’s an image that was designed for reproduction,” she says.

Gwyneth knew that the miraculous production of the original would make any copy elusive. She was also awed by the importance of Our Lady of Guadalupe in the designs of Providence: “God raised up Our Lady of Guadalupe to help restore Spain to the Faith, bring that Faith to the New World, and convert a whole people. It’s hard to overestimate her importance. I felt very strongly the importance of communicating that significance through a successful painting.”

Gwyneth felt certain, however, that almost any painting would be preferable to the photographic print currently hanging in the church. “The main problem with a photo of a painting is that it destroys the sculptural reality of the paint and the dynamic nature of how the colors of the paint respond to changing lighting conditions,” she says. Gwyneth was able to capture something of the tilma’s texture with her linen canvas, and she was able to use real gold, as in the original. “A skilled painter can match color much more closely than even the best camera or printer. But gold in particular can’t really be captured accurately with photography, because gold changes so much with the light,” she explains. She argues that the importance of gold in many sacred images is an important reason to prefer a painting over a photograph. Of course, she acknowledges, photographs are useful for accurately capturing proportions—indeed, unable to travel to Mexico, Gwyneth relied on photographic references for her own copy.

Copying with paint rather than with a camera also enabled Gwyneth to capture the original across time rather than at a single moment in time. Gwyneth says she did not intend to recreate the image as it appeared in 1531 or at any other moment in time, something that would have been impossible, but also reductive of the providential importance of the painting across time. Nonetheless, Gwyneth did have to make important decisions about where to depart from the image as it appears today. Any painting ages, but Our Lady of Guadalupe has seen a great deal of violence, especially in the 19th and 20th centuries. Her crown was removed, possibly by order of a bishop, in the 1880s, and her face has been reworked several times.

As soon as Gwyneth learned about the removal of the crown, she knew she wanted to include it. “Denying Christ’s sovereignty—and by extension, the queenship of Mary—has been an essential feature of secularist ideology since the Enlightenment. The faithful have responded by insisting on the kingship of Christ and the queenship of His Mother,” she notes. In Mexico during the Cristero War of the 1920s, faithful Catholics resisted the government’s increasingly aggressive secularization with the battle cry, ¡Viva Cristo Rey! ¡Viva la Virgen de Guadalupe! In 1925, Pope Pius XI instituted the feast of Christ the King for the last Sunday of October. In 1945, Pius XII declared Our Lady of Guadalupe Empress of the Americas and in 1954, he established the feast of the Queenship of Mary for the last day of May. “To combat secularism today, I think there’s an urgent need for more depictions of Christ as King and Our Lady as Queen. In particular where an image has been defaced by having its crown or jewelry removed, we need to restore them,” Gwyneth argues.

The space available in the church—a niche with a window that may have originally housed a side altar, dictated the size of the copy. 40 by 24 inches, or about 1/3 the size of the original, Gwyneth’s copy is also proportionally taller than the image on display in Mexico today, to allow for the crown. The proportions are probably closer to those that would have been on display for most of the image’s history.

After stretching, sizing, and priming her linen canvas, Gwyneth brushed the entire surface with a medium gray color. Due to its high value, a white canvas can throw off the painter’s sense of the relative values of colors applied to it. Using charcoal transfer paper, Gwyneth then transferred the composition from a poster reproduction to the surface of the primed linen.

She then applied broad fields of color in the background, the mandorla (the almond-shaped indicator of sanctity surrounding the Virgin), and the mantle. Since the original tilma surface of cactus fibers is much rougher than linen, Gwyneth needed to give the painting plenty of texture. She achieved this by using a dry brush technique with abundant scumbling. Mixing little oil into her pigments and applying paint to only the tips of her brush, she applied many layers of closely related colors. This leaves gaps in the layers of paint so that various hues can be seen in the finished surface. After filling in the major fields of color, she turned to the smaller areas, using wetter and smaller brushes. She worked gradually, returning to most areas several times to add depth and apply detail after allowing previous coats of color to partially dry.

For the face, Gwyneth elected not to copy one of the several captured in photograph, but to try “to create the most beautiful face I could out of the various faces she’s worn.”

When the rest of the painting was complete and had had some time to dry, Gwyneth began applying gold. She had originally considered gold leaf, but decided against it both because of the risk of decay and the difficulty of application on canvas (gold leaf is typically applied to specially prepared wooden panels). Gwyneth was also concerned that gold leaf would lend too flat an appearance. She turned instead to shell gold, which she first used on her 2018 painting, St. John Fisher. Unlike gold leaf, which is solid gold that has been hammered into thin sheets, shell gold is made up of gold particles suspended in gum arabic. The particles are visible on the surface, and some of the underpainting comes through. This resembles the tilma image and allows the artist a great deal of control. “You can vary the effect of shell gold by varying the underpainting and the quantity applied,” Gwyneth explains. She used orange hues under the shell gold where she wanted a more fiery appearance, as on the lining of the Virgin’s mantle.

The final step was adding crisp, dark brown outlines, as in the original. “The image really popped when I added the outlines. They’re extremely effective in lending power to the image from a distance,” Gwyneth says.

Preparing an Empress for Veneration

After painting was completed, Gwyneth selected the most authentic Spanish colonial frame possible within the budget. The frame, she says, is an important way to integrate a painting into its surroundings: “Sometimes, one must strike a balance between the painting and its context, but this time, the architectural context was already in continuity with the painting.” The church for which the painting is destined has a Mission Revival exterior and some Spanish colonial interior elements as well.

Gwyneth hopes that her completed copy of Our Lady of Guadalupe makes up for some of the insult and sacrilege committed against the Empress of the Americas. Today, Our Lady of Guadalupe is bereft not only of her painted crown, but also of her shrine. In 1974, she was removed from the Baroque church built on the spot she had requested and deposited in a concrete brutalist structure. “It’s a revolutionary building, designed to break with the past,” says Gwyneth. “That’s a total betrayal of the Virgin of Guadalupe. As her history attests, she’s a testament to the continuity of the Our Lady’s love for her people across time, space, and cultures. I hope that someday she will be re-enthroned in her proper, worthy home in the old basilica.” Until then, at least one contemporary copy has re-crowned the Virgin of Guadalupe as queen.

* For the history of the Old and New World Virgins of Guadalupe, see: